Anglers lined up at the estuary 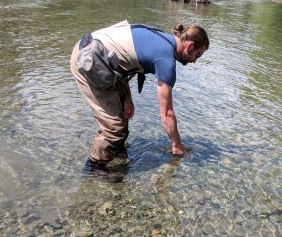 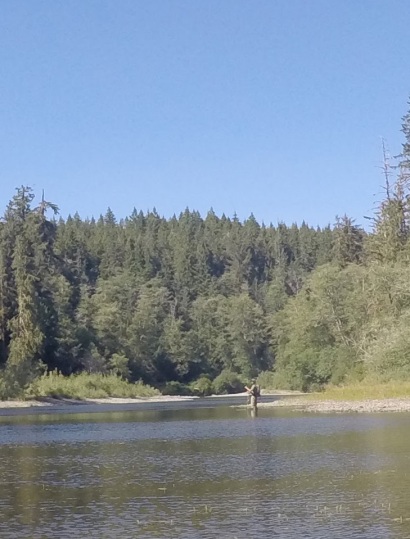 Historically, the sea run cutthroat trout fishery on Vancouver Island has been one shrouded in secrecy, however, with the right timing comes the opportunity for the fly angler to tangle with this scrappy sea trout nearly year-round. Almost every stream and many beaches on our coastline are home to these fish.

Like both rainbow and brown trout, there exists an anadromous form of the cutthroat trout, commonly referred to as a sea run cutthroat. 12+ major subspecies of cutthroat trout exist in North America, with B.C. being home to two – the Westslope cutthroat and the Coastal cutthroat, the latter being native to Vancouver Island. The sea run form is less brassy in colour than the resident freshwater form, appearing more silvery with black spotting all over the body, and the trademark red slash under the jaw.

Enigmatic, nomadic phantoms – sometimes they are where you’d expect to find them, sometimes they are not. Tracking down sea run cutties is half the battle and it is not uncommon to visit more than one spot to find the fish. They follow the shoreline during salt water travel, tending to stay shallow and on the move in search of their next meal. Watch carefully for signs of fish finning or sipping and take a few casts, but if nothing is happening, carry on.

The diverse physical characteristics of different beaches mean that they will fish differently at different stages of tide. Up the estuary, flood tide (incoming) and the last hour of ebb tide (outgoing) are said to be most productive, so long as the water is moving. Though high tide is normally preferred for beach fishing, on some beaches, low tide can expose more feeding territory or cause the fish to school up. The only way to learn the nuances of a specific beach is to be there to cast a line.

I’ve been told that significant tide changes of more than 6 feet tend to increase fish activity. During the New Moon and Full Moon, when the sun and moon align with the Earth, their gravitational forces combine, creating the most significant differences between high and low tides.

Rivers stocked with cutthroat include the Campbell, Quinsam, Puntledge, Oyster, and Quatse. Other known hot spots include Big Qualicum River and Cluxewe River. Rivers that fish well during fall usually also fish well in spring as well once salmon fry emerges and begins the downstream migration. In the Victoria area popular fisheries include Esquimalt Lagoon, the Gorge and the Sooke Basin.

My sea run cutthroat fly box is my most minimalistic, containing only: rolled bead-head muddler minnows, classic wooly buggers, simple egg patterns, shrimp and a Yellow Sally (sea run cutthroat are said to prefer yellow). Spring is when cutthroat trout chase salmon fry and fall is when they gorge on salmon eggs. I use light line to present as naturally as possible – the majority of these fish are in the 12 to 18 inch range (although some can reach up to 8lbs).

Boundaries differ between rivers, but usually the tidal boundary will be located somewhere near where the first bridge crosses the river. Below that, you are fishing tidal water and D.F.O. Sport Fishing Regulations apply with a separate license required. On Vancouver Island, sea run trout are open to sport fishing April 1-Mar 31. In areas 12-27, which cover most of Vancouver Island’s tidal shoreline, regulations stipulate that there is no retention of wild trout, retention of hatchery marked fish only (minimum 30cm length) and a barbless hook is a must (to minimize trauma to the fish and increase survival rates). If the area is restricted to fly fishing only, you may not attach a weight or float to the line. Be sure to check the region you are fishing for local finfish closures, such as the newly implemented Otter Point (Sooke) to San Juan Point (Port Renfrew) closure to help stabilize the population of southern resident Killer Whales in addition to closures on several larger Island rivers through summer and fall to protect returning salmon, such as the Nimpkish, Salmon and Cowichan rivers, as well as Nanaimo and Comox harbours. Rockfish Conservation Areas also restrict some shoreline access to help conserve in-shore rockfish populations, especially in the Strait of Georgia. For the most up to date tidal and freshwater salmon regulations, visit www.pac.dfo-mpo.gc.ca/fm-gp/rec/index-eng.html. You can also download the Fishing B.C. mobile app for convenient reference (provided you have cell service).

Elusive, vagabond, unpredictable – the captivation of the sea run cutthroat is found in the thrill of the chase, the intensity of the take and the transience of the trout.