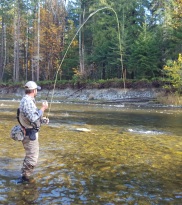 The fight of a summer steelhead

Grant Brown with his first steelhead caught on the fly

Fly casting below the bridge on the Salmon River

Drought conditions in recent years have led to summer fishing closures for the rivers & streams of south Vancouver Island, however the waters of the north & central Island remain open. Within these open river systems is a year round steelhead fishery, and this time of year is prime time for the storied summer run steelhead. The thrill of casting a fly to these elusive, explosive, cartwheeling fish of summer that can swim up to 35mph is the perfect match for those summertime fishing adventures.

Steelhead, or sea run rainbow trout, are divided into 2 distinct, genetically pre-determined runs, with summer run fish being smaller and travelling further upriver in their migrations to the upper tributaries to spawn than their winter run counterparts. Although both runs spawn in spring and unlike salmon, spawn multiple times, summer runs enter freshwater when sexually immature (typically May through October) and begin feeding before spawning, in contrast to the winter fish who arrive December through April, full of eggs and ready to spawn. While exact dates vary year to year, returns begin earlier the further up Island you go, with the north island runs starting in May and central-south Island runs starting around July. When fresh from the ocean, steelhead look more silvery, whereas once a fish has been in freshwater for some time, their coloring begins to resemble a rainbow trout.

Match the fly size to the water, going smaller in the clear, thin waters of summer. Proven summer steelhead flies include: stimulators, worms, leeches, eggs, nymphs, sedges, and of course, Roderick Haig Brown’s steelhead bee. These fish will actively rise to the fly to feed, and on some Island rivers, will even take a dry fly off the surface, but employ stealth to avoid spooking the fish. Floating fly lines reign supreme and specific water depths can be targeted by weighting the fly with beads and/or lead.

Stalking summer steelhead, for me at least, comes down to covering water, casting from shallow to deep, focusing on tail outs, deep pools, rocks, cover and walking pace, 3-8” deep runs until I find the fish. The more miles between you and the masses, the more likely the fish. Once you happen upon a productive pool, note the location as it will usually be worth returning to.

Steelhead are hatchery enhanced on the Cluxewe, Quatse and Stamp rivers, however on the rest of the Island, steelhead populations remain wild. Other well-known opportunities exist on the Gold River & White River systems, and exploration of the 31 rivers listed as open in the 2019-21 Freshwater Fishing Synopsis will reveal more, with at least half of them containing summer run steelhead. Only a handful of east coast Vancouver Island rivers still contain summer steelhead whereas the majority of the less urbanized, west coast rivers contain them. New this summer is a summer freshwater fishing closure on Vancouver Island rivers and streams within management units 1-1 to 1-6, with exceptions of the Nitnat River, Oyster River, Puntledge River, Big Qualicum and Quinsam River. In Region 1, all wild steelhead are catch & release only and a steelhead conservation tag is required. For in season regulation changes, please see http://www.env.gov.bc.ca/fw/fish/regulations/changes/1719/region1.html.

Summer river closures were introduced as a conservation measure, to increase fish survival rates and decrease stress when stream flows are low and temperatures are warmer than usual. On many Island rivers, record low flows are now the norm, leaving many pools (and the fish in them) isolated from the main stem of the river. In fact, this year, river levels across Vancouver Island are near historic lows for this time of year, due to low spring rainfall and lower snow packs. When water temperatures increase and stream flows decrease, there is less dissolved oxygen in the water, more stress on the fish and post release fish mortality increases. Optimal temperature for trout is 10-18°C, and fishing is discouraged in waters with a temperature above 20-21°C as studies show that fish which are caught and released are less likely to survive.

Not all rivers which remain open ought to be fished, with enough options to fish elsewhere and leave low, warm, drought starved waters alone. In the heat of summer, fish the mornings and evenings when water temperatures are cooler and catch and release survival rates are higher. Fish higher up in watershed, where the ambient and water temperatures decrease as elevations increase. To increase catch and release survival rates, fight and land the fish quickly; on release, revive the fish; and minimize the time a fish spends out of water.

Why does conservation matter? Looking back at any vintage Pacific Northwest fishing book, you see pictures of limits of steelhead on stringers. These days, they are known as the fish of a thousand casts. The numbers don’t lie. On Vancouver Island, rivers with steelhead returns range between 10-1000 returning fish over a 4 month period. Returns on the majority of Island river systems are in the low hundreds (with many in the double digits), down from the thousands of the 1970’s and 1980’s. If we want to preserve the populations of this fleeting fishery for future generations, we need to do our part to angle ethically and promote conservation.