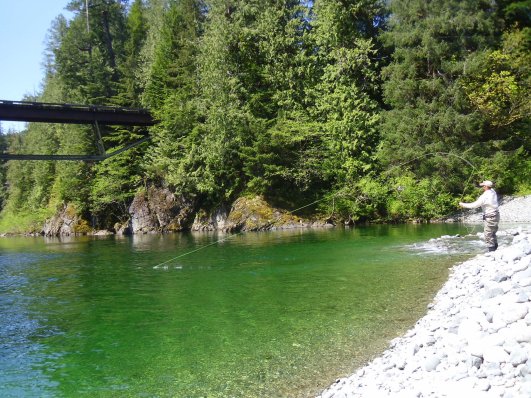 As seasons shift and a new fishing year begins, thoughts move to warmer weather, longer days, spring hatches and adventures to come. Vancouver Island has a number of rivers and lakes which are designated as fly only fisheries by the Ministry of Forests, Lands and Natural Resource Operations. Where not outwardly regulated, there are many more crystal clear waters with easily spooked trout where the fly angler has a distinct advantage.

The reason for introduction of fly only gear restrictions on certain waters is as a conservation measure to maintain quality, sustainable fish populations and opportunities by increasing the survival rate of released fish (as well as those that are not caught due to increased challenge to the angler) and decreasing incidental catch of spawning salmon, in turn reducing the impacts of recreational fishing.

In B.C., waters specially regulated as a fly fishery are designated as either “artificial fly only” or “fly fishing only”. According to the B.C Freshwater Fishing Synopsis, the definition of fly fishing is “angling with a line to which only an artificial fly is attached. Floats, sinkers or attracting devices may not be attached to the line when fishing is restricted to fly fishing only”. An artificial fly is “a single pointed hook that is dressed only with fur, feathers, hair, textiles, tinsel and/or wire and to which no external weight or external attracting device is attached. Two or more hooks tied in tandem is not permitted. When gear is restricted to artificial flies only, floats and sinkers may be attached to the line”. Interestingly, the regulatory definition of fly fishing varies by location, with our neighbours in Washington going as far as outlining allowable lines, reels and even nets.

On Vancouver Island lakes, 9 rainbow trout containing lakes are managed as fly fisheries, with most regulated as “artificial fly only”. These lakes are best fished March through June and again in fall, with a later spring start and earlier fall end the further north and higher elevation you go. On “artificial fly only” lakes, as early as March, fishing a chironomid, long fluorocarbon leader and strike indicator brings trout to the fly like bees to honey.

Access to many of these remote lakes can be a challenge with rough, overgrown, private and deactivated gravel roads, washouts and gates. For up to date information from Island Timberlands, Western Forest Products and Timber West Corp. about private logging roads, including public access, hours, rules and notifications, visit http://blog.islandtimberlands.com, http://www.wfproadinfo.com & http://www.facebook.com/TimberWestForestCorp/.

18 rivers on Vancouver Island are partially regulated as “fly fishing only”, 5 having “artificial fly only” zones. As a general rule, rainbow trout fishing picks up (usually) in mid-March when the temperature rises and spring weather sets in, with hatches continuing through June. Most Island rivers are also home to resident coastal cutthroat trout. Sea-run cutthroats are found almost year-round in the estuaries but are most abundant during the spring and fall. Summer steelhead can be found June through October and their winter counterparts December through April. The 5 specifies of Pacific salmon are in the river systems at varying times July to December. All wild trout, steelhead and char must be released from Region 1 streams.

These fly fishing only opportunities, are available all over Vancouver Island, from the Sooke River in the south, to the Benson and “Link” Rivers in the North. On the West Coast, options include the hike-in “Anderson Lake”, as well as the Caycuse River and upper Gordon River (when open). Around Cowichan, there is of course the “Fly Fishing Capital of Canada”, the Cowichan River, in addition to Lois Lake & Pete’s Pond.

Toward Tofino is the Toquart River, or toward Gold River, the Heber River, Buttle Lake tributaries or the hike-in Elk River all provide excellent sport for the fly aficionado. In the Campbell River & Sayward region, designated fly fisheries include the easily accessible Farewell Lake as well as Campbell River, Adam River and Tsitika River. For more information about fly fisheries on Vancouver Island, including specific fly restricted areas and dates, check the 2017-19 B.C. Freshwater Fishing Regulations Synopsis.

On waters where gear restrictions are not in effect, most of us still gravitate toward our fly rods as our choice way to cast a line. One thing that defines fly fishing is that it is about more than just the fish – for most, it simply comes down to the feeling.