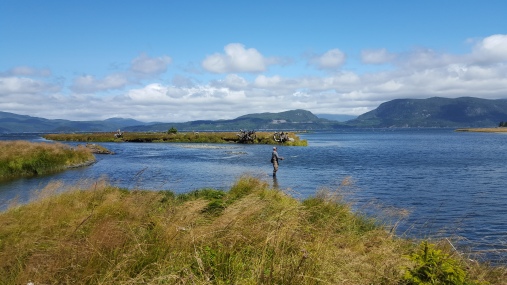 Last year, one of my fishing goals was to learn how to beach fly fish for pink salmon. The advice was always pretty standard – pink for pinks, the deeper you wade the harder to cast, don’t push the fish away…

I spent the better part of 5 weeks last year in pursuit of pink salmon. From central Vancouver Island to northern Vancouver Island to the central coast. Most Island rivers were closed, so the majority of my efforts were focussed on the beaches and estuaries. I ended up spending far more days skunked than I’d care to admit. On central Island beaches, the small numbers of pinks seemed to run straight up river, not holding on the beaches for long. The best beach fishing was found north of Campbell River. When I finally found the fish, despite deliberate preparations, I learned what I couldn’t prepare for when fly fishing for pink salmon.

This year, being an odd year means that it will be a good year for the southern coast, as the pink salmon returns are Fraser River bound. As I discovered the hard way last year, during even years, pinks return to northern rivers (and are later). In mid to north Island waters, pink usually return annually. A further distinction I learned is that pinks returns are most dominant on west coast Vancouver island during odd (outside) years and east coast Vancouver island during even (inside) years. Sooke’s biennial pink salmon festival, occurring July 30, 2017, helps me to remember when the fish are where. Late July until September is the time, but arrive early because where the fish are, the anglers usually are too (especially on long weekends).

On the beach, pinks hold during low tide before moving into freshwater. This makes binoculars essential to determine where on the shoreline the fish are (or aren’t) so that you can cast to them (or move on to another location). Usually, when the differences between high and low tide were on the larger side, I found fish. Regulation-wise, the management of salmon fisheries in BC, in both tidal and freshwater, is the responsibility of Fisheries and Oceans Canada (DFO).

The estuary is where the river meets the ocean. Fish move up the estuary into the river on flood tide making the best fishing approximately 2 hours before high tide. Based on the size of the fish, size of the flies and casting distance, I fished a 5 weight single hand rod and a 6 weight spey rod, which were about perfect.

I revisited the north Island river which took my Volkswagen’s tire on the first attempt and on the second trip, hurricane force winds terrorized us for 3 straight days, making it next to impossible to throw a cast. I hear it can be a good river but to me, it’s more trouble than it’s worth. Although I was told a heavier rod is an asset in the wind, the best tools in my arsenal were a heavy sink tip and a semi-presentable roll cast.

Hatcheries facilitating annual runs exist on the Quatse, Puntledge, Oyster, Quinsam and Nanaimo rivers as well as Nile Creek. Last year, because of low water, the only freshwater rivers open before mid-September were the Big Qualicum, Puntledge and Campbell/Quinsam rivers.

When pink salmon move into freshwater, they behave like any other Pacific salmon, running up river to return to their natal spawning grounds. Pinks move into freshwater on high tide and up river quite quickly, depending on conditions, spanning distances up to 30km+ in a day. They tend to spawn closer to the ocean then other Pacific salmon species, and interestingly enough, in Alaskan waters, occasionally interbreed with chum salmon, resulting in sterile “chumpys”.

Up on the central coast, we intercepted a late run of pink salmon. There were a number of gear anglers grumbling about the low visibility of the milky blue river and lack of fish, but I cast a fly anyways. Finding feisty pink salmon on the fly on the first cast reinforced to me that a properly presented fly can outperform just about any day.

The saying is pink for pinks, but I found the most effective flies to be weighted and neon green – bead head tinsel nymphs, handlebars, and bead head rolled Muddler minnows. When I finally found the fish, I was having a hard time landing them. I was recommended to fish 1-inch streamers and was expecting the fish to be smaller (3-5lb). I soon realized I was fishing too small a hook for these 5lb pinks, upgraded my hook one size and began landing them.

Pinks are definitely the most aggressive of the salmon – when the bite is on, it’s on and even when it’s not, the catches still happen, just fewer and further between. Last summer, I put my learnings into action, but wasn’t ready when I felt my first pink salmon strike the fly – all the preparation in the world is no substitute for the experience.