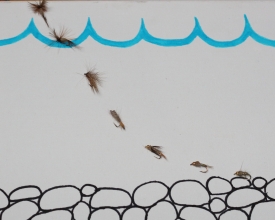 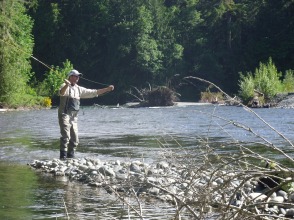 With ample snowpack this year, there is a growing optimism that through the summer, the rivers will stay true and the lakes full, rather than the dry creek beds synonymous with the droughts of recent years. Although this past winter has been colder and snowier than us Islanders are accustomed to, the spring freshwater fly fishing outlook on Vancouver Island will prove to be, as always, among the finest (and highly anticipated) in Canada with opportunities for fish story worthy trout, char and bass.

Changing river levels in spring due to snowmelt, runoff and rains will make it essential to check the water levels of any river you plan on fishing. When snowpack melts and spring rains arrive, water levels rise rapidly, leaving the river raging, high and chocolate milk brown. Rivers with controlled flows such as the Big Qualicum will usually clear fastest during blow out conditions. Once the water levels drop, level, clear and temperatures rise, spring fly fishing will be at its best.

Spring hatches on Vancouver Island will start with chironomids and progress to mayflies, stoneflies, caddisflies, damselflies, dragonflies and the occasional black ant hatch. The hatch process progresses from the bottom dwelling larvae stage to the maturing of the nymph as it rises up the water column until the hatch at the surface. Although an overly simple overview of a complex process, whatever stage of this emergence is happening dictates where you will find trout, so, match the hatch.

Most Island rivers are home to cutthroat trout, but there are also a number of rivers with other species present. Rainbow trout – jumping, twisting, rodeo trout, are the ultimate sport to the fly fisherman and the reward for correctly matching the hatches of spring. Resident rainbows can be caught in the Cowichan, Campbell/Quinsam, Oyster and Taylor rivers. A variety of fly sizes is key – these fish can be infuriatingly finicky accepting nothing larger than a #16 hook at times.

Brown trout can be found in the deep pools of the Little Qualicum, Cowichan and Adam/Eve systems. For such a big fish, don’t underestimate the power of the a tiny bead head fly like a Prince Nymph or a classic Wooly Bugger. All wild trout must be released from streams and the limit is 2 hatchery fish per day, unless prohibited by water specific regulation. Check the Freshwater Fishing Synopsis for water specific closures, opening dates/areas, gear restrictions and in season changes.

Dolly Varden char, often confused with bull trout, can be found in slow deep sections of North Island rivers such as the Cluxewe, Adam/Eve, Quatse and Salmon. Minnow and streamer patterns are by far the most effective flies to use. Their skin has light speckles on a dark background, unlike true trout which have dark speckles on a light background. Catch and release is mandatory for all char on Vancouver Island.

Sea run cutthroat begin feasting on salmon fry beginning their saltwater journey March through May. Though most Island fishermen are tight lipped about their favourite beaches to fish, the best known opportunities exist around estuaries near Parksville, Nanaimo and Courtney/Comox. Explore gravelly, gradual, salmon bearing, stream-fed beaches and use fry and minnow patterns. Look for fish breaking the surface of the water, indicating their presence, and if you don’t see any activity, move onto the next spot. Keep in mind that tidal influence varies beach to beach, and although fishing the rising tide is a good idea in theory, sometimes the geography of the beach decides the most effective time to fish. April 1-Mar 31, the limit is 2 hatchery fish over 30cm and mandatory release for all wild trout.

After a prolonged winter, some Island lakes will go through a mild spring turnover, with shallow lakes less prone to this occurrence than deep lakes that freeze over. Turnover is what we call the brief, murky water period that occurs when air temperatures rise, warming the oxygenated surface layer to the same temperature as the debris filled bottom water and spring winds cause the layers to mix. Why this matters to anglers is because the bite will be slow while the water is cloudy, but once the water clears, oxygen levels rise and temperatures warm, the bite will pick up.

As a cooperative effort between Habitat Conservation Trust Foundation, BC Conservation Foundation, Ministry of Forests, Lands and Natural Resource Operations, and local angling associations, a small lake fertilization project was undertaken to improve fishing opportunities for larger rainbow trout on Vancouver Island. Reginald, Reagan*, Merrill, Martha, Flora* and Lizard* lakes have all benefitted from application of diluted nutrients intended to increase zooplankton and insect densities in some nutrient poor lakes.

Starting March 3 through May, Freshwater Fisheries of BC will begin stocking “Spring Catchable” rainbow trout in lakes such as Elk, Langford, Kissinger, Fuller, Westwood, Echo, Maple, Spider and many more. Current stocking information is available at http://www.gofishbc.com.

If you are looking for chunkier than usual cutthroat trout, try Wolf, Lowry, Cowichan or Sproat lake. Beefy brown trout can be found in Cowichan, Cameron, Somenos and Rooney lakes. In Region 1 lakes, the daily limit for trout is 4, only 1 over 50cm.

Eastern Brook trout (which are actually char) can be caught in Spectacle Lake on similar flies to what a rainbow trout would bite on. In many North Island lakes, there are large, aggressive Dolly Varden char. Kokanee, landlocked Sockeye salmon, are present in Anderson, Horne, Brannen and Cowichan lakes (as well as a few others), with a daily quota of 5 (none from streams).

Bass spawn May-June, making them aggressive and easy to catch on the fly with large flies such as woolly buggers and leeches. Stillwaters to target bass include St. Mary, Elk, Matheson, Shawnigan, Quennell and Spider lakes. There is no retention beginning April 15, but after June 15, the daily limit is 4*.

When fishing a new lake, check the bathymetric charts beforehand to identify creek mouths, islands, drop offs, shoals, structure and other fishy looking areas to target. Check your route in advance and leave your destination in better condition than you found it.

There is a simplicity in spring that brings promise to any forecast – light, warmth, riverbanks and trout on the dry fly.