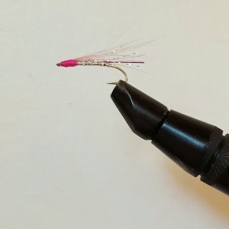 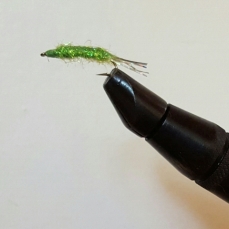 My fishing journey began just over 20 years ago, and my younger years were spent river fishing, ice fishing and lake fishing while my mom and her partner fished the Saskatchewan Walleye Trail. From there, I fished my way out west across southern Alberta into the Rockies, through the Okanagan and out to Vancouver Island. This is where I met my partner and he inspired my passion for fly fishing.

I’ve beach fished for sea run cutthroat and caught the odd pink salmon in the river, but one thing I’ve never done is beach fish for pink salmon on the fly. There was one ill-fated attempt a couple years back when fly fishing the beaches for pinks was the intent, however after 5 hours of driving, 20 miles down a logging road, a giant log made its way into the tire of my old Volkswagen and prevented us from even wetting a line. So this year, my next adventure was to learn how (and where).

Pinks are the smallest and most abundant of the 5 species of salmon, averaging 3-5lbs but can reach up to 10lbs. The males develop prominent humps and hooked noses during spawning, which is why they are sometimes called humpbacks or humpies. They are the most aggressive, making them easy to catch and I am told they are not leader shy. They have a soft take and soft mouths, so I’ve been instructed to use a slow strip speed, set the hook softly by just lifting my rod tip, keep it high and not to pressure them too much when hooked. Regulation wise, in tidal waters the minimum size is 30cm, the daily limit is 4 and on some river mouths, including the the Keogh and Cluxewe, there are limits on hook size.

Local anglers have advised me to use a 5-8 weight rod, but 6 weight seems to be the preferred choice. A heavier rod may be an asset in windier conditions or if an early Chinook or Coho takes the fly. An anodized reel is a must to prevent to protect it from the salt water and prevent rust. A sealed drag system will go a long way toward protecting the bearings of the reel. Based on the size of the fish, size of the flies and casting distance, I’m leaning toward starting with my 5 weight single hand rod and bringing my 6 weight spey rod in case conditions are right. Insiders recommend that hot fly patterns to use on local beaches are 1” streamer patterns with sparsely tied tails. In terms of colour, pink for pinks (in various shades), however silver and neon green can also be effective. I’ve tied up a number of variations of weighted and unweighted flies including Pink Eves, handlebars, shrimp and a couple mini bucktail patterns.

As far as set up goes, I plan to use an intermediate sinking line with unweighted flies and a floating line with weighted flies. The leader should be 9-12 feet with 8lb or 2x tippet. The clearer the water, the longer the leader should be. Chest waders are a must to wade in the frigid ocean water for any length of time. I will fish shallow first so that I don’t push the fish out of casting reach and also will keep in mind the deeper I wade, the harder it will be to cast. After fishing, I’ll need to rinse all my gear well with freshwater to avoid damage from the salt water.

The Fraser run pinks return to their home river to spawn in odd years which means that the southern Island will see very few pinks this year. In mid to north Island waters, pink return annually, while on the northern coast of British Columbia, pink return to their coastal streams in even-numbered years. On Vancouver Island, we should expect to see them begin to show up in mid-July to August through September, however their exact arrival can vary by up to 2 weeks. Being an even year, I will need to go further north on the Island in order to find the most likely locations to find pinks. Hatcheries facilitating annual runs exist on the Puntledge, Oyster, Quinsam, and Quatse rivers. Other areas I’ve been recommended to try include Keogh, Cluxewe, Eve and Salmon rivers, as well as Naka Creek, Salmon Point and Nile Creek.

River estuaries are the location to start fishing as salmon are travelling from saltwater to freshwater to spawn. Take time to observe the beach and look for fish activity such as porpoising or breaking of the surface to locate the schools of pink salmon (binoculars can help with this). Tides also must be taken into account, as fish funnel from the estuary into the river on high tide and hold close to shore during low tide. They can continue to hold in tidal water for a couple of days to a couple of weeks if the rivers are too low and the water temperatures too high. The most productive times to fish are said to be when high tide coincides with dawn or dusk or if there is a large change in tide

So now the techniques have been taught, flies are tied, gear is packed and the last thing to do is wait for the pinks to show up. Soon, it will be my turn to put my learnings into action and feel the strike of a pink salmon on the fly off the beach for the very first time.